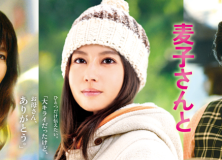 Actress Maki Horikita appeared, and on December 2013, the film “Mugiko-san” (Director Keisuke Yoshida) was filmed in various places in the city.
This shooting was discussed with the city and Fujino Kuni Yamanashi Film Commission, and various scenes were shot mainly in the city from January 23 to February 16, 2012.
In Tsuru City, this is the first time to have film shooting even though many drama shootings have been done several times until now.
About 70 percent of all the movie was filmed in Tsuru city. 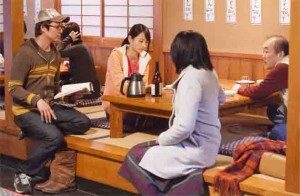 In a restaurant in city 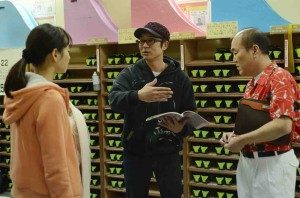 A scene in a bowling alley

Many companies, shops, and citizens in the city cooperated in the filming.
Thank you very much to everyone who rented construction tools, cars, stores, etc. as play goods, and who cooperated with shooting extras in the cold.
Director Yoshida and other staff members said, “The people in Tsuru city were very supportive and the shooting went smoothly. Thank you very much.”
The main story of "Mugiko-san to"
Wheat wearing a knit hat and landing at a small station in the countryside, Mugiko came to the countryside where her mother (Ayako) who had passed away spent her youth and found that her mother was an idol in town!?
The people of the town that are excited to see Mugiko, looks just like Ayako. Mother's best friend, mother's passionate fan ... Just as it is a continuation of youth, good adults erupt around the wheat. For Mugiko, her mother was the most awful mother who left the house with her brother. However, by knowing the mother through the people of the town, Mugiko starts to feel different for the mother. In the countryside where my mother spent his youth, a couple of mysterious days associated with the continuation of his youth. A gentle feeling spreads in the heart of the wheat.
＜＜ Actors/ Actresses ＞＞
Ryohei Matsuda, Youichi Nukumizu, Kimiko Amari, Yumi Asou
December, 2013: National road show
September, 2014: Blu-ray/ DVD on sale
（ｃ）2013「Mugiko-san to」Production Committee
「Mugiko-san to」Official Website: http://www.mugiko.jp/
History/ Culture Sightseeing